What happens to unclaimed money at security?

You pass security and hear a signal because there are coins in your pocket. You throw them hastily in a bin and pass security again. You grab your belongings and run to the escalator for you do not want to risk missing your flight.

At the gate, when boarding is about to start, you realize that you left the coins in the bin. Well, you are not the only one. In 2015, the US Transportation Safety Administration (TSA) collected $765,759.15 in loose change that went unclaimed at airports across the USA.

What happens to the coins? TSA officials store the money in a secure place, where it is logged. Members of the US Congress have tried to designate that money for members of the US military and their families. The bill passed the House of Representatives, but failed to pass the Senate.

The TSA provides a detailed accounting of the amount collected. In addition, it must describe how it will be used to enhance aviation security. In its latest report to Congress, TSA says the money collected in 2015 will be used to support the TSA Pre-Check Expansion Effort. 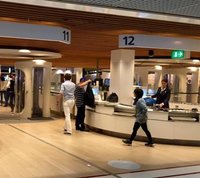 We asked Schiphol Amsterdam Airport what amount passengers left behind at security in 2015. This airport appears to hate transparency as much as airlines do. It would not tell how much money it collected.

Items taken to the lost and found department will be auctioned off after 3 months if they are worth up to €450 ($500) or after 1 year if they are worth more. Are you curious to know how much money the auctions yield? Sorry, but that is also secret. The contrast with the TSA's openness could not be greater.

The airport even abolished the integral online annual report. Over 2014 there was still an integral report available on the Internet, but the 2015 annual report has been reduced to separate pieces of information. As a result, it does not offer a good overview anymore. It matches the airport’s apparent penchant for secrecy.