What can you expect in case of a downgrade?

They have no obligation to observe the contract and to get you at your destination close to the original arrival time by rebooking you on another airline. The only right you have is a refund, but that does not bring you where you are supposed to be. You would have to buy a new ticket shortly before departure, implying that the price will be sky high.

Airlines also reserve the right to overbook their flights. They use advanced algorithms based on past experience to calculate how many passengers will not show up for a particular flight – so-called no-shows - for example due to late arrival of a connecting flight.

Thus, carriers overbook their flights to prevent that they will fly with many empty seats due to no-shows. Sometimes, however, the algorithms have it wrong. In those cases more passengers show up than expected, so some of them need to be bumped. Usually, this pertains to economy class.

But first class may also be oversold so that a business passenger cannot fly in the class he booked. Rather, he will get a downgrade, that is, a seat in economy class. You would expect that carriers will refund the fare difference between business and economy class on the day you bought your ticket.

US airlines do not do that. If they downgrade you involuntarily, they refund the price difference on the day of departure. As economy class tickets are very expensive on the day of the flight you may get a very small refund, if any.

In Europe there is more diversity. When asked Lufthansa they told us they offer on all flights from the Americas to Germany a flat rate of €1,500 to business class passengers who are involuntarily downgraded if they were traveling more than 2,176 miles. The question remains what Lufthansa will do in other cases.

British Airways says there is no generic way of calculating refunds. It is based on the journey, fare type, fare rules and class of booking. The carrier will notify you of how much the refund is on the day, so you will be completely dependent on whatever the carrier will tell you. 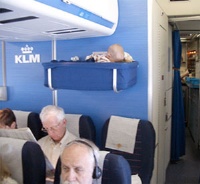 KLM Royal Dutch Airlines refuses to tell whether they compensate downgraded passengers or not.

But you had better not count on it. Even when EU regulation 261/2004 legally requires KLM to compensate passengers whose flights are canceled or for hours delayed, they deny compensation in the vast majority of cases.