Weapons at the airport

In 2016, US Transportation Security Administration (TSA) officers screened each day 2 million passengers, 1.3 million checked bags and 70,000 airport employees. They discovered in carry-on bags 9.3 firearms per day of which 7.7 were loaded.

This sounds good, but in 2015 undercover investigators were able to smuggle mock explosives or banned weapons through checkpoints in 95% of trials. The weirdest thing, however, is that it is legal to carry a loaded weapon into 11 of the 20 major US airports, including Los Angeles, Atlanta, Phoenix and Las Vegas. Small wonder that they all have had shooting incidents.

The problem is that 1 of the USA’s most powerful lobbies is the National Rifle Association (NRA) that looks after the US weapon industry’s interests. Whenever people die due to 1 of the numerous mass shootings in the USA the NRA invariably comes up with the same “solution”: more weapons, even in schools and campuses.

This is obviously in the interest of the weapon industry, but apart from more industry profit it can only lead to more shooting incidents and victims. Look at Europe, where strict weapon laws are in place and carrying a weapon is not considered a basic right. Shooting incidents rarely occur in the Old World. 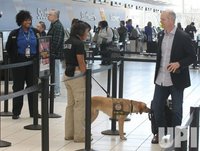 Or look at Australia, where stricter weapon laws have been introduced accompanied by federal and state governments gun buybacks.

David Hemenway and Mary Vriniotis of Harvard University observe in their 2011 meta-research of the Australian Gun Buyback: ”From the perspective of 1996, it would have been difficult to imagine more compelling future evidence of a beneficial effect of the law.”

That is to say, beneficial for people as the number of gun massacres and deaths dramatically decreased, but detrimental for the weapon industry’s profit.

The TSA lists the top-10 airports for firearms discoveries in 2016 in absolute numbers. Hartsfield-Jackson Atlanta International Airport tops the list with 198 in 2016. This could be expected, not only because it is legal to carry a weapon into the airport, but also because it is the world’s busiest airport in terms of passengers.

A correct presentation would be the number of firearms discoveries per passenger passing through the airport. We calculated our own ranking on the basis of this standard.

Denver International is now number 1 on the list and Atlanta ranks 2nd. Dallas/Fort Worth International ranks 2nd on the TSA list, but 6th in our ranking. You can compare both rankings in de table below.