A Taiwanese tourist is on holiday in the Philippines on the island Boracay. She is wearing a micro bikini that doesn’t escape locals other vacationers’ attention. They take pictures of her and post them on social media. The photos go viral and attract the police’s attention. Police track down the Taiwanese woman and learn in which hotel she is staying on the island.

They summon the woman, believed to be in her 20s, to the Boracay police station. When she arrives at the police she is wearing a dress. She tells the police that her bikini is considered normal in Taiwan.

Police chief Maj. Jess Baylon dismisses her explanation. According to him the micro bikini is unacceptable in the Philippines’ conservative culture as it is ‘literally a string’. If you want you can check it by watching a (slightly censored) photo here.

However, Boracay doesn’t prohibit the wearing of skimpy attire. Therefore, she gets a fine of 2,500 pesos (€44 or $48.50) for purportedly violating an ordinance. This ordinance forbids the taking and display of lewd photographs.

Thus, it seems quite weird as she did not take and display any pictures of herself. Those who did post the photos are other tourists and locals.

Not unexpectedly, the pictures divide the internet between those who cry indecent and those who don’t see anything wrong. In fact, it conforms that there is no accounting for tastes. 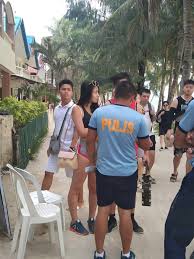 If Baylon would go to Western European beaches he might get a heart attack. There he would see numerous women (and men) enjoying the sunshine topless.

However, topless bathing was also tolerated in Boracay until the early 1990s. But at the time there were still few tourists and residents on the island. One consequence of the surge in tourists is that secluded and private areas have become scarcer.

Related: “Airlines and clothing police and “Do only females know what proper attire is?”