On August 30, 2020, an American Airlines pilot sees a man flying in a jetpack in the path of incoming jets to Los Angeles International Airport. He estimates the jetpack is only about 300 yards (275 meters) out of his window. The plane is approaching the airport at about 3,000 feet (900 meters) and 10 miles (16 km) out for landing. The pilot reports his observation of the jetpack to air traffic control. Moments later a Southwest pilot confirms the jetpack report. Watch a video here.

Both the American and the Southwest pilots report the incident using 'visual flight rules.' This means that there was plenty of visibility and that it wasn't dark at the time. Air traffic control warns a jetBlue flight: "Use caution, person on a jetpack reported 300 yards south." After the pilot acknowledges the instruction, the controller concludes with: "Only in LA."

When journalists try to find out more from the pilot, American Airlines tells them to contact the Federal Aviation Administration (FAA). But the FAA says it is not aware of something like this ever happening before. However, they have alerted local law enforcement and the Federal Bureau of Investigation (FBI). 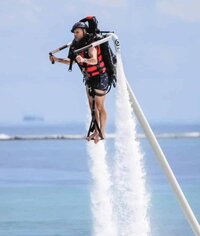 According to the FAA they have turned the report over to the Los Angeles Police Department (LAPD) for investigation. Possibly they will be trying to locate the person via a helicopter or ground patrol. The LAPD say they performed a flyover in the area, but are unable to locate anyone flying a jetpack.

It is known that jetpacks can fly as high as the American pilot indicates, but it is pretty uncommon to do so. Promotional or fun videos usually show jetpacks flying much lower than the reported guy flying a jetpack. Therefore, it has been suggested that the incident could be an internet or social media stunt.

Related: Near miss caught on tape