Is Trump responsible for gun violence?

Time and again Donald Trump proves that his intellectual ability makes him mentally unfit for the job of president of the USA. He believes that twittering is the best way to run a country. Small wonder that so far he could sign only one (1) bill into law: the tax reform bill. This makes him the most unproductive US president in modern history.

It is sad and shocking that the tax reform law will benefit Trump and other rich people at the expense of social expenditure for low income brackets. In addition, it will lead to a surge of the national debt according to the nonpartisan Congressional Budget Office (CBO). This is the exact same thing as happened after the tax cuts under President Ronald Reagan, who also believed in the fairy tale of the Laffer-curve that essentially says that tax cuts will increase tax revenues.

Equally absurd is that Trump takes credit for the fact that 2017 was a record year in aviation safety as the tweet below shows. This is even less true than saying that Trump is responsible for mass shootings and other gun violence because he did not do anything to reduce the possession of firearms.

Since taking office I have been very strict on Commercial Aviation. Good news - it was just reported that there were Zero deaths in 2017, the best and safest year on record! 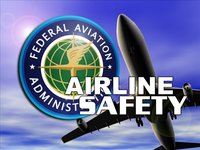 A mentally fit person would never utter such a blatant nonsensical claim. The Trump administration’s only visible efforts related to aviation are:

1. It refused to put into effect 2 laws that already passed 19 months ago, which normally only occurs in a banana republic. One law would allow families to sit together in a plane and the other would entitle passengers to refunds of checked-baggage fees when the bags are not delivered on time.

3. Due to a (temporary) ban on large electronic devices from the cabin those devices had to be transported in the cargo hold. This did not make flying safer, but rather more dangerous because it increased the risk of uncontrollable fires in the hold.

Thus, Trump’s claim that he has been very strict on commercial aviation is fake news, while relating it to safety in the skies is absurd because this is the result of a long term process. As Harro Ranter, president of the Aviation Safety Network (ASN), puts it:

“It is impossible to link the worldwide level of safety directly to recent US policy changes. US efforts have been instrumental to get to where we are today, but it takes years for policy changes to reach effect and only in conjunction with other efforts by the aviation industry.”

Related: “Airlines and the new ethics in the White House”