Is there a dress code for airline passengers?

Carriers have an array of arguments to preclude you from flying. An airline can deny you boarding or remove you from the plane if a crew member considers your attire or behavior unacceptable.

You are a security threat, or you smell bad, or you are unruly, or whatever. As long as the airline does not discriminate, it can use many arguments to deny you boarding.

The following examples illustrate this clearly.

1. A Southwest Airlines flight attendant tells passenger Kyla Ebbert that her mini-skirt is potentially offensive to other passengers. Ms. Ebbert does not argue, but drapes a blanket over her legs. The story does not tell whether the flight attendant was Islamic or just jealous.

However, Ms. Ebbert did the rounds of morning talk shows the next days, prompting Playboy to ask her to pose for the magazine. She did so for an amount of less than 6 figures, according to herself.

2. A US Airways flight attendant asks passenger Deshon Marman to pull up his sagging pants to keep his underwear from showing. He refuses and although his skin is not visible the pilot makes a citizen's arrest and removes him from the flight. Next, San Francisco police arrest him.

3. Publicity over this case prompts another US Airways passenger, Jill Tarlow, to step forward with her own experience 6 days earlier. A man wearing little but women’s undergarments is allowed to board a US Airways flight in Fort Lauderdale. 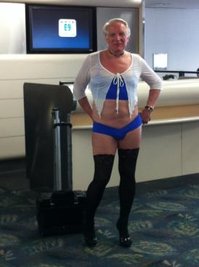 Other passengers already complain at the gate – so before boarding - but airline employees ignore these complaints. Ms. Tarlow makes a picture of the man, who loves to pose for her.

The conclusions are clear:

1. There is no single dress code for passengers.

2. Refusal to comply with a pilot’s orders may lead to your arrest.

San Francisco police say that Marman was arrested on suspicion of trespassing, battery and resisting arrest.

However, no charges have been filed against him.