Fleeing from the airport 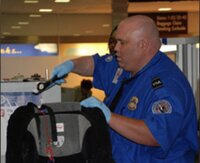 Officers of the US Transportation Security Administration (TSA) screen a passenger’s carry-on bag on December 28, 2020. When they discover a firearm loaded with 7 bullets, they call for the man to step aside. But instead he flees New York’s John F. Kennedy International Airport, runs out of the terminal and jumps into a taxi.

The officers can easily identify him. He leaves not only his shoes behind, but also his carry-on bag, a vest, some cash, his New York State learner’s permit, his passport and his boarding pass. The man has ticketed to fly to Atlanta with several companions. Officials interview them before allowing them to board their flight. Travelers may have a concealed carry permit. But that doesn’t allow for a firearm to be carried onto an airplane’s cabin.

As law enforcement know the man’s identity, he will be facing at least the fine of $4,100. But given the lack of mitigating circumstances and the suspect's level of cooperation, it will be considerably higher. Should the man be a TSA PreCheck® member, he will lose TSA PreCheck status for a period of time.

Passengers may travel with firearms in their checked baggage if they are properly packaged and declared. A firearm must be unloaded, packed in a hard-sided case, locked, and packed separately from ammunition. The passenger must take the case to the airline check-in counter to declare the gun. It will then be placed in the belly of the airplane for transport.

Nationwide last year, the TSA discovered 4,432 firearms in carry-on bags, averaging just over 12 firearms per day. This is a 5% increase nationally compared to 2018. No less than 87% of firearms detected at checkpoints last year were loaded.

Related: Weapons at the airport