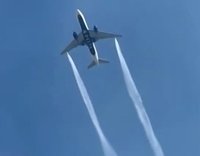 "Drops of water were coming down. I thought it was a rainbow, and I looked up, but it was gasoline." A fifth-grader in Los Angeles tells about this experience right next to his school. Many schoolkids have a similar experience. It appears that a Delta Air Lines plane is dumping fuel over a populated area while it is returning to the airport.

Delta explains that the plane experienced an engine issue and acknowledges the incident, but can’t say more about it as it continues to investigate the issue. However, the carrier doe participate in a joint press conference with local health and community officials.

Shortly after the incident Delta dispatches 13 cleaning crews to work with school crews at the schools. They clean all outside surface areas that students could come into contact with. But Delta doesn’t explain why its pilot violated the rules by dropping fuel over a populated area at a low altitude. Had the altitude been higher (from 8,000 feet or 2.4 km) it would have been no problem. In that case the fuel would have allowed to evaporate before reaching the ground. And the schoolchildren would not have been affected.

According to the audio the pilot tells the traffic controller: "We've got it back under control. We're going to come back to LAX. We're not critical.” The controller responds: “OK, so you don't need to hold or dump fuel or anything like that?” And the pilot says no.

Why dumping on schools?

It is really puzzling. First the pilot says there is no need to drop fuel. But a few moments later he starts dropping dumping it over a residential area with 5 elementary schools and at a low altitude.

The route map below shows that a limited part of the short flying time is over the Pacific Ocean. As the pilot tells traffic control that the engine is under control, it was technically perfectly possible to drop fuel in the ocean. 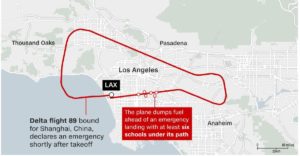 No explanation by Delta

In the absence of an explanation by Delta, one may speculate that the pilot forgets to dump fuel until he starts the final approach. While doing the pre-landing checklist he might discover that the plane is too heavy. Rather than going around he might decide to drop fuel over the populated area on the route to the airport.

But so far Delta has said very little about the incident, so we can only guess. Hopefully, Delta will draw lessons from the short flight and the improper dumping of fuel, despite their silence.