Customer service no priority of LOT

One of our readers shares his experience with LOT Polish Airlines. He travels on a business class ticket from Amsterdam through Warsaw to Toronto. In Amsterdam he visits the lounge, but there is hardly any proper food. Thus, he trusts that he will get breakfast on the flight to Warsaw.

In the plane, however, he observes that every business class passenger is served breakfast with the exception of him. Thus, he asks a flight attendant why he does not get breakfast. She responds that LOT’s Amsterdam agent has instructed her to give his food to another passenger who was not originally booked on the flight, but has been re-booked from a KLM-flight to the LOT-flight.

She does not know why she has to give his food to the re-booked passenger. When he asks whether there is no other food she gives him a very small piece of hard bread. As he had counted on getting food on board it is a very inconvenient experience.

After the trip he writes in an email to LOT that he would appreciate it if they could contact the Amsterdam agent and let him know why the stewardess was instructed to give his food to another passenger. In addition, he writes that he expects to be compensated for the inconvenience.

The same day he receives a response with an apology and the information that they have forwarded his message to the Passenger Claims department and that “the reclamation process might take up to 30 calendar days.” 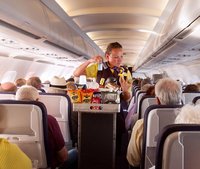 After 33 days he sends them a reminder as he did not hear anything from the Passenger Claims department. Two days later the LOT agent writes in an email that he has sent a friendly reminder to the claims department.

Eight days later he receives an offer of a 20% discount on any European route that LOT operates. The offer is valid for 1 year, but does not apply to internet fares, additional fees and taxes. Our reader considers the offer disappointing and writes that a more appropriate compensation would be crediting 20,000 bonus miles into his Miles & More account.

After 2 weeks LOT gives him the choice to accept the offer or to receive 6,000 miles into his Miles & More account. The same day he responds that he primarily flies intercontinental routes, so that the first option does not work for him. Therefore, he selects option 2 of 6,000 bonus miles even though it is considerably less than he considers reasonable.

One month later has asks LOT in which year the miles will be credited to his account. He does not receive a response, but 5 days later the miles are credited. The lesson is that customer care does not seem to be a priority at LOT. Customers must be persistent to get even a minor compensation for a lack of service.

Moreover, LOT never explained why his breakfast had been served to a re-booked passenger. Poland ranks 36 on Transparency International’s Corruption Perceptions Index. Thus, LOT’s Amsterdam agent may have given an upgrade to a relative or friend and ordered to serve our reader’s breakfast to this person.