Usually, such agencies work on the basis of No Cure, No Pay. Thus, you don’t need to pay for filing a claim with them. But if the claim is successful they will keep 35-50% of the claim money as a reward for their mediation. 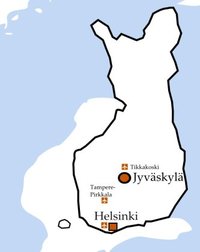 Finnair refutes the claim by arguing that the flight Amsterdam-Jyväskylä was hardly delayed. Although the passengers arrive in in Helsinki 5 minutes late, they can easily make the transfer to the flight to Jyväskylä. They end up in their final destination 7 minutes before the scheduled arrival time.

Small wonder that the airline is upset about the lawsuit. By claiming compensation in court the passengers misuse the civil procedure, according to the carrier. Therefore, Finnair demands that the judge will sentence the 2 passengers to paying the carrier’s full legal cost: €1,500 ($1,714) plus VAT.

In this respect the judge appears to side with the winning party. The 2 passengers know that they arrived in Jyväskylä without any delay. Airhelp’s 2 lawyers also know it as Finnair told them so already 2 years ago. Therefore, the judge calls on Airhelp to take the airline’s cost at their own expense. But the Airhelp’s role is fairly dubious.