Aviation’s center of gravity continues to shift eastward. China is the largest contributor to passenger traffic growth as it has more than 10 airports with over 20 million travelers per annum each. 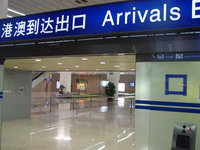 Subject to capacity considerations the Chinese air transport services have the potential to add an additional 3 billion travelers by 2040, according to the ACI. This represents a 21% share of the contribution to global passenger traffic growth that is forecasted by 2040.