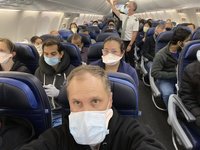 Dr. Ethan Weiss is a cardiologist and a scientist at the University of California San Francisco. On May 9, 2020, he tweets a remarkable photo (see on the right). It shows the cabin of a United Airlines flight from Newark, New Jersey, to San Francisco. The flight is packed, all seats are taken. However, only 10 days before the flight United’s Chief Customer Officer sends a message to all passengers. It reads: "We're automatically blocking middle seats to give you enough space on board."

The picture Dr. Weiss shot in the cabin shows that the Chief Customer Officer’s statement is a flagrant lie. Every seat including all middle seats appear to be taken. Among the passengers onboard the flight to San Francisco are 25 medical professionals, including Dr. Weiss.

“We’ve overhauled our cleaning and safety procedures and implemented a new boarding and deplaning process to promote social distancing. Our flight to San Francisco had an additional 25 medical professionals on board who were flying for free to volunteer their time in New York. We’ve provided complimentary flights for more than 1,000 doctors and nurses in the past few weeks alone – and all passengers and employees were asked to wear face coverings, consistent with our new policy.”

It suggests there were initially 25 open seats on the flight. United may have decided to make those seats available to the medical professionals for free. It would be a nice gesture that is also for free. After all, the seats would not have yielded any revenues anyway. But the passengers have been exposed to health risks. Interestingly, Ms. Gibbs applies the same trick as politicians frequently do. She focuses on a positive aspect of the United flight. The carrier makes seats available for free to medical personnel related to the coronavirus. But she remains silent about the matter she is asked to comment on. That is the fact that all seats on the flight Newark-San Francisco are taken, including the middle seats. Despite United’s promise to block all middle seats.

This way she avoids another lie. Now she doesn’t need to deny that United has broken its pledge to automatically block middle seats.

Obviously, airlines find themselves in a difficult position now the number of passengers is down nearly 92% from a year ago. We have to wait and see whether United will have learned the lesson that it is wise to think twice before making a bold promise.

Related: The end of air travel