A Boeing 737-800 takes off from Imam Khomeini International Airport at the Iranian capital Tehran on January 8, 2020. A few minutes later the plane crashes near Tehran airport. “The pilot had no contact with the tower and didn’t announce an emergency situation before the crash,” says Reza Jafarzadeh, civil aviation spokesman.

At takeoff the plane carries 167 passengers and 9 crew members. The crash kills all on board according to Iranian emergency officials. They cite a technical issue as a possible cause despite speculations that an Iranian missile brought down the aircraft.

The plane belongs to Ukraine International Airlines that places a statement on its website expressing sympathy with the perished passengers and crew. Wisely, it doesn’t address the crash’s cause.

Small wonder that US authorities soon appear to believe that the cause is not a technical issue. Rather, they think it is “highly likely” that the cause was an errant Iranian surface-to-air Tor-Mi missile made in Russia. Watch a video showing that the Ukrainian Boeing being shot by a missile from behind.

A catastrophic engine failure wouldn’t turn the entire jet into a fireball. But the video suggests this is exactly what the Ukrainian plane appears to become in its final moments. 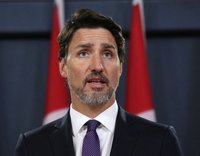 Canada’s Prime Minister Justin Trudeau also says intelligence shows that Iran has downed the airliner, presumably by mistake. The comparison with MH17 urges itself. In both cases it is a Russian made missile that downs a passenger plane.

Initially, Iran dismisses the allegations as Western propaganda that Iran calls offensive to the victims (sic!). But as more and more evidence emerges, Iran acknowledges on January 11, 2020 that its armed forces “unintentionally” shot down the Boeing.

This is probably true. A few hours earlier they fired 22 missiles to US bases in Iraq. Given Donald Trump’s erratic behavior they might have thought the Ukrainian Boeing was a US cruise missile sent for an action of revenge. It illustrates the danger of having such an erratic person in the White House.

It is a natural human reflex to deny any involvement when something goes wrong. By acknowledging the mistake the Iranians are doing better than the Russians, who still deny they shot down flight MH17 despite overwhelming evidence. Small wonder that Russian statements are rarely taken seriously.