Tell me only what I want to hear On February 29, 2020, fake president Donald Duck Trump tells his supporters that the Democrats are politicizing the coronavirus. It is just a new Democratic hoax according to him. No less than 18 times he will say that the virus will go away in April, like a miracle. Small wonder that the USA is the world’s largest coronavirus hotspot with over 125,000 corona deaths.

Yet, Trump keeps praising himself on a daily basis. Obviously, he knows that repetition is the power of advertising. Therefore, he repeats numerous times that by acting early he has saved millions of American lives. But he regularly rewrites history. On March 17, 2020 for example, he claims: “I felt it was a pandemic long before it was called a pandemic.” In reality he was lax and kept telling people the virus would vanish by itself when it would get warmer. As a result, thousands of Americans died unnecessary. This is not precisely a miracle. 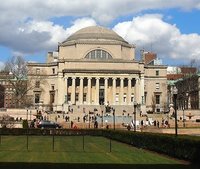 What would have happened if the USA had started social distancing measures just 1 week earlier? Researchers of Columbia University, a reputable institution, devises a model to find this out. Their conclusion is that it seems likely that almost 36,000 fewer people would have died from the virus.

Trump as a scholar

This study – at least the conclusions - has been aggressively attacked by the well-known scholar and researcher Donald Duck Trump: "It's a disgrace what I watch from this fake news media and from some of these liberal institutions. Columbia is a liberal, disgraceful institution to write that because all the people that they cater to were months after me. They said we shouldn't close it."

He does not even attempt to present a substantial argument. As usually, he only labels Columbia, just like he does with people. Fake news is news that Trump does not like. He himself spreads on a daily basis real fake news, baseless claims that he likes. As of early April, Trump has told 23.3 lies per day in 2020 according to Forbes.

Trump even goes as far as to saying he saved millions of American lives. If true, it would have been a real miracle. But it is a ridiculous claim, although his (declining) not or lowly educated base seems happy to believe anything he says. As a semi-illiterate person it is difficult or impossible for Trump to present arguments based on analyses and studies. Thus, he is dependent on what aides tell him. And they know they will be out if they tell him something he doesn’t want to hear.

Related: The USA no longer leads the world