Trump destroys jobs in the US travel industry

The USA has become less attractive for international inbound tourism since Donald Trump lost the popular vote but won the presidency thanks to the archaic voting system. Since then he has been busy with playing golf, watching Fox News on TV, and promoting his own business.

Running a business is considerably simpler than leading a country. When Trump eventually became aware of this he said he had not expected that being president requires so much and complicated work. Actually, it is way too difficult for him. 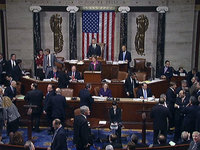 Small wonder that so far Trump is the most unproductive US president ever. Nine months into the presidency Congress still did not pass any piece of legislation that Trump has proposed.

To distract attention from this failure he signed many executive orders in front of the camera. But these are mostly symbolic, while judges ruled that several of them were even unconstitutional.

Another failure is that jobs in the travel industry are being destroyed since Trump took office. The US Travel Association observes that international inbound arrivals declined in July again, following even more drastic drops charted by revised data for the first quarter of 2017.

Trump succeeded in a couple of months to gamble away the USA’s reputation as leader of the free world and the country is now widely considered a kind of banana republic. During the G20 meetings in Hamburg, Germany in early July 2017 Trump did not lead and at some point even his daughter Ivanka took his seat.

The US Travel Association’s Travel Trends Index calculated by Oxford Economics shows that international visitation of the USA contracted in 4 of the first 7 months of 2017, with February (down 6.8%) and March (down 8.2%) being the weakest months of 2017 so far.

Illustrative is that while demand for flights from China to the USA is down, it is rising to Canada. President Trump’s anti-China rhetoric and his travel bans – that appeared largely unconstitutional - are certainly part of the reason for the decline in Chinese arrivals.

Although Trump probably was trying to satisfy his shrinking group of supporters, he destroyed jobs in the US travel industry. The graph below displays Trumps incredibly low approval ratings as calculated by Gallup, certainly compared to president Obama’s ratings in the same period of his presidency.