Fuel is considerably more expensive in Scotland than in Spain or Germany. What’s more, there are reasonably priced hotels in Spain and Germany. So why is the US Air Force now paying considerably more than necessary for fuel and lodging? Just look at the place where air force crews now stay.

It is no longer a reasonably priced hotel. Rather, they stay in the very expensive golf resort Trump Turnberry. Why in that resort? The name speaks for itself. Fake president Donald Trump owns it and makes a lot of money at the expense of US tax payers. 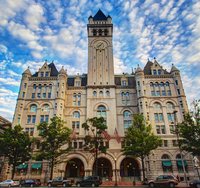 Where do you think official visitors and delegations from foreign governments visiting the USA stay? It depends on whether they need to be in New York or in Washington DC.

Where do you think the US government will hold the G7 meetings in 2020? Not in Camp David, where then real president Barack Obama hosted a G8 summit in 2012. As this presidential retreat already is secured, the additional security cost are low. What’s more, it requires no rental payment.

Donald Trump is planning to host the 46th G7 summit in Trump National Doral Miami resort in Florida. US tax payers will pay extremely high cost for cost of lodging and security. However, the struggling Trump resort will get a much needed financial boost from the tax payer.

The US constitution prohibits the president to enrich himself by using the power of the office. But Trump is still the shady businessman he was before he lost the popular vote by nearly 4 million votes. He landed in the White House not thanks to the voters, but thanks to the Electoral College.

As a shady businessman Trump routinely broke the law. After the Electoral College appointed him president he hasn’t changed this habit. He is withholding US military aid to Ukraine until its president Zelensky will agree to investigate Trump’s political rival Joe Biden. This kind of corruption is daily business in Ukraine, but until shortly not in the USA.