Travelers split about dress code in the skies 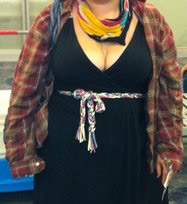 Nearly ⅓ (31%) of travelers think airlines do not have the right to ask passengers to change their attire before boarding a plane according to a poll conducted by GO Airport Express, a Chicago-based ground transportation company.

On the other hand, more than 1 in 5 (21%) think carriers have the right to ask passengers to change their attire before boarding.

The survey had only 289 respondents, so they are probably not representative for the traveling public. Surprisingly, slightly more men (24%) than women (21%) responded that airlines should be able to ask people to change clothes before boarding.

However, some respondents nuance their responses, for example by noting that if a carrier clearly states in its terms and conditions that it has a dress code, it should have the right to enforce the policy.

Others answer "yes" in instances where the questionable attire would jeopardize the safety of other passengers or is inappropriate for children.

"These results indicate travelers care most about getting to where they are going and are not paying attention, or caring, what others are wearing at the airport or on a plane," says John McCarthy, president of GO Airport Express.

There have been silly incidents on US airlines of women who were denied boarding due to how they were dressed. It seems likely that this can only occur in the USA and in Islamic countries. Carriers involved in this kind of incidents include JetBlue and Southwest Airlines, but it could just as well have been other US airlines.

European travelers would not understand at all why flight attendants of US airlines make big problems about normal clothes.

Related: ”US clothing police“, “Is there a dress code for airline passengers?” and “Writing police”