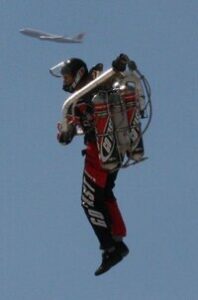 On August 30, 2020, an American Airlines pilot sees a man flying in a jetpack in the path of incoming jets to Los Angeles International Airport. He estimates the jetpack is only about 300 yards (275 meters) out of his window. The plane is approaching the airport at about 3,000 feet (900 meters) and 10 miles (16 km) out for landing. The pilot reports his observation of the jetpack to air traffic control. Moments later a Southwest pilot confirms the jetpack report. Watch a Read more
Safety and Security
No comments
Permalink

Obviously, it doesn’t matter that this name is meaningless for it is just a bogus fee. Airlines are creative in inventing new charges like seat reservation fees, etc. Most of them are unrelated...
Read more
Airlines, Fares
No comments
Permalink Much of Nelson’s frustration...
Read more
News
No comments
Permalink

When flyers approach a security checkpoint at an airport, they must remove all items from their pockets, including wallets and loose change. The US Transportation Security Administration (TSA) recommends that travelers place those items directly into their carry-on bags. This is to prevent they will accidentally leave anything behind in a bin. But quite a few flyers neglect the TSA’s recommendation and lose money. Thus, the TSA collects unclaimed money that passengers leave behind at security checkpoints.

The Boeing 747 has proved to be a relatively safe aircraft. Only 2 Boeing...
Read more
News, Safety and Security
No comments
Permalink