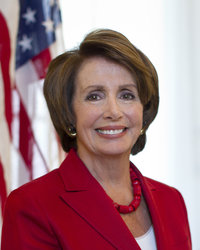 House Speaker Nancy Pelosi (picture) is optimistic about bipartisan support for aid to the US aviation industry as part of a broader stimulus. Her optimism stems from the impression that Republican support for airline jobs relief seems to have grown lately. Nicholas Calio, president of the trade group Airlines for America, emphasizes the importance of bipartisan negotiations. They should shed light on the amount of the aid - possibly some $2 trillion - and the distribution over particular industries including aviation.

Airlines are lobbying members of the US Congress. Republicans have rejected the $2.2 trillion Democratic plan. They propose a stimulus package of $1.1 trillion, but they have signaled that they may support a bigger stimulus package.

Airlines keep the US Congress under pressure by warning that they are planning mass reductions after an existing federal prohibition on job cuts expires at the close of business on September 30, 2020.

The problem for carriers is that few passengers are still traveling both nationally and internationally. In the USA, for example, some 30% of airline passengers report for screening at airport portals compared to a year ago, according to the US Transportation Security Administration (TSA).

American Airlines announced in August 2020 it would cut 19,000 employees once federal payroll aid expires. This would bring its workforce reduction at 30% since the start of the coronavirus pandemic. United Airlines warns of more than 16,000 potential cuts. The carrier says it expects no meaningful recovery in travel until a coronavirus treatment or vaccine will be widely available.

Other US airlines are also planning to cut jobs by using a variety of schemes. For example, tens of thousands of staff have taken unpaid leave in recent months, or have participated in other schemes aimed at cost-reduction.

In Europe the situation is very similar. One of the largest airlines, the German carrier Lufthansa, had already announced a surplus of 22,000 full-time positions. Recently, it added that it will have to increase that number. And British Airways is consulting on cuts of up to 12,000 jobs.

Related: Trump destroys jobs in the US travel industry