A horse in the cabin 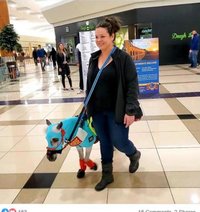 Ronica Froese buys 2 first class tickets on a flight from Grand Rapids, MI to Ontario, CA. It will be her first flight in 1st class thanks to her fellow passenger, a miniature horse named Freckle Butt Fred. Ronica considers it her emotional support animal. As she wants Fred to have enough room, she reserves 2 first class bulkhead seats.

It seems that Ronica takes more precautions than on average. As the flight would be long, she books a flight with a stop. As a result, each flight is no longer than 3 hours. Moreover, she is considerate for fellow passengers by taking precautions. She gives Fred a teal hood preventing that those who are allergic to horses would be affected by his hair.

In addition, prior to the trip Ronica works with other service horse handlers to prepare Fred. This includes sonic exercises to get Fred accustomed to loud noises. Moreover, it includes potty training for when he needs to relieve himself at the airport.

Also, she gives Fred special shoes for horses and a yoga mat to stand on the floor. This ensures enough traction to stable himself during take-off and landing. She even trains him to lay down on command and sit in her lap like a dog in the event the plane crashed. Thus, they could have evacuated down the slide.

Ronica does not experience any problem at the airport and during the flights. “Fred is the definition of a perfect service animal in flight,” she tells PEOPLE. “He is so bonded with me, he is willing to do anything I ask of him.”

It is self-evident that Fred draws a lot of attention from crew and passengers. Many politely ask whether they can take a photo or video with their cellphone. There are even people waiting 30 minutes for them to come out of the bathroom just to snap a picture.

But there are also people who do so without asking. Ronica considers that rude: “We aren’t a side show and would like to be treated with respect. After all, an emotional support animal is classified as medical equipment.”

Related: Animals in the cabin