Ejected from a fighter jet 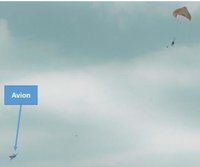 A 64-year-old man in France has no interest in flying. However, he gets a gift from his employees in the form of a flight in a fighter jet, a Dassault Rafale B. At 2,500 feet above the ground he is flung into the air with a parachute because he presses the ejection button. The picture on the right shows the plane (bottom left) and the parachute (top right).

Investigators with France's Bureau of Enquiry and Analysis for Civil Aviation Safety write a  report about the incident that was recently published. The investigators find that the man, who remains anonymous in the report, has no experience with military aircraft.

Once in the air, the man becomes so stressed by the ride that he presses the ejection button in panic. As a result, he is thrown from the aircraft into the air, where he then parachutes down to the ground.

At the time of the flight he is wearing a smartwatch. This allows investigators to record him.

The man had failed to properly attach his helmet (see the picture right at the yellow arrow). Therefore, the helmet flies away when he ejects himself from the plane.

Nonetheless, after having pressed the ejection button, he lands on the ground with no serious injuries. He is taken to a hospital to be evaluated, but he seems to be in a good condition.

The pilot also appears to be okay. He lands safely and appears to have experienced only minor facial injuries caused by the man’s ejection.

Related: How difficult is it to steal an airplane?