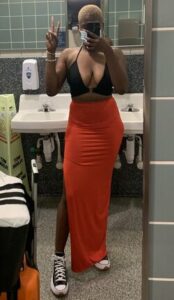 On October 6, 2020, Kayla Eubanks (22, pictured) has a ticket for a Southwest Airlines flight, but is denied boarding due to her attire. The gate agent tells her that passengers may look at her in her attire and be offended. When Eubanks asks her to be more specific, the agent says that her halter top is the reason she can’t be let on the flight. Next, Eubanks asks the agent to produce a copy of Southwest’s dress code. Although she seems to be looking for it, she is unable to find it.

Southwest claims that its Contract of Carriage prohibits clothing attire that is 'lewd, obscene, or patently offensive.' But we are unable to find it in the contract. We only find rules - including a dress code – for those “Traveling on a Southwest Airlines Guest Pass.”

It seems likely that there is 1 dress code rather than different codes for groups. The dress code we have found appears to be very short: “Dress to impress. While Southwest's dress code is relaxed and casual, you will be expected to present a clean, well groomed, and tasteful appearance.”

Any dress code is subjective. How people interpret words like ‘well groomed’ and ‘tasteful’ may widely vary. Thus, one may question how useful the use of such terms  is.

But the most interesting part are the first 3 words: “Dress to impress.” As the dress code starts with these words, they are likely the most important. Given Eubank’s picture, quite a few people may be impressed, perhaps more men than women. Some people may feel uneasy or jealous, maybe more women than men. And prudish or narrow-minded people may feel offended. This is all in the game as all kinds of people can be found in a plane. 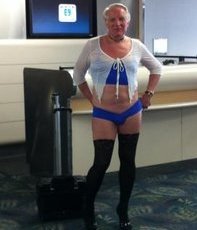 Fortunately, the captain appears to be a wise man. He gives Eubanks a shirt and tells her she can board if she will wear it. After being held at the gate for half an hour, Eubanks is able to board the flight by wearing the captain’s shirt. Interestingly, a man dressed in ladies underwear didn’t have any problem with boarding some time ago.

Southwest seems to feel uneasy that Eubanks’ initially was denied boarding as the carrier apologized to her.

Related: Do only females know what proper attire is?  and Travelers split about dress code in the skies