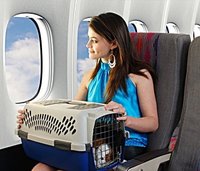 It seems that United Airlines does not always hire the right people as flight attendants. This leads to free publicity, but also to publicity that is disastrous for the airline’s reputation. On March 12, 2018 United assumed full responsibility for the death of a passenger’s dog on board a United flight from Houston to New York LaGuardia.

A passenger took her dog on board in a pet carrier in compliance with the requirements set by the US Transportation Security Administration (TSA) and that must be put under the seat in front of the passenger. However, a United flight attendant ordered her to put the pet carrier into an overhead bin. The passenger adamantly refused, but the flight attendant insisted and contended later she did not know there was a dog in the carrier.

But Maggie Gremminger, who was on the flight, cites on social media accounts from other passengers that it was communicated to the flight attendant there was a dog in the carrier. There is also a passenger who witnessed the incident and writes on Twitter: “It was clearly a dog and while the customer was adamant about leaving it under the seat, the attendant pushed her [to put the carrier in an overhead bin]”.

Even United says in a statement: “We have learned that the customer did tell the flight attendant that there was a dog in the carrier. However, our flight attendant did not hear or understand her, and did not knowingly place the dog in the overhead bin.” The carrier adds that it takes full responsibility, whatever that means.

Airlines are required to report to the TSA any deaths, injuries or lost animals from flights with at least 60 seats. In 2017 United accounted for 18 of 24 animal deaths on flights, so its track record is pretty bad.

The most amazing aspect of United’s statement is that the flight attendant would not have heard or understood what the dog’s owner said. Does the carrier hire hearing impaired people as flight attendants or people who do not understand plain English? Or do United flight attendants still need more training, as we earlier observed? 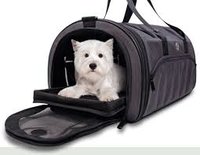 Update
By April United will issue bright colored bag tags to customers traveling with in-cabin pets. The airline also backtracked from its earlier statement that the customer did tell the flight attendant there was a dog. However, other passengers have said that the dog’s barks were audible from inside the bin.

If the flight attendant and United tell the truth the attendant must be blind and deaf. Fortunately, the Harris County, Texas, district attorney’s office said its animal cruelty division is working on a criminal investigation about what happened on the plane.

Related: “United agents need more training”, “Airlines as auctioneers” and “United is getting used to crises”