Do only females know what proper attire is?

The USA is probably the most prudish of all non-Islamic countries. Some American gate agents and flight attendants illustrate this occasionally by barring a passenger from boarding because they consider the passenger’s attire inappropriate.

On March 26, 2017 a United Airlines gate agent in Denver refuses to allow 2 young girls on the plane because they are wearing leggings. Although we consider leggings tasteless, it is just that: a matter of taste, not a matter of inappropriateness. And tastes differ.

Shannon Watts, an activist who witnesses the exchange at an airport in Denver, tweets that she has heard the gate agent saying: “You know these are not my rules, I just enforce them.”

United Airlines confirms that 2 teenage passengers were not allowed to board a flight from Denver to Minneapolis because their leggings "were not in compliance with dress code policy for company benefit travel."

The interesting thing is that this time it is not a gate agent’s or flight attendant’s initiative to deny boarding because of ‘improper” clothes, but United’s own rules for so-called pass-riders, who are United employees or their eligible dependents standing by on a space-available and traveling for free.

According to Flyzed.info there are 3 rules:
1. Pass riders’ overall appearance should be well-groomed, neat, clean and in good taste.
2. Attire should be respectful of fellow revenue passengers, employees and pass riders.
3. Pass riders may wear denim attire (such as jeans), shorts that are no more than 3 inches (7.6 cm) above the knee and athletic shoes when traveling in coach or business cabin. 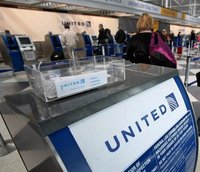 There you go again: rule 1 speaks about good taste, which is very subjective. Small wonder that there are differences of opinion. By the way, we never heard of a male gate agent or flight attendant who barred a passenger from boarding because he considered the passenger’s appearance inappropriate. In all cases we know of it was a female,

We like to hear from you if you have ever seen a male gate agent or flight attendant who considered a passenger’s attire inappropriate.

Related: “US clothing police” and “Is there a dress code for airline passengers?”