A banana republic in North America

In 2016 Trump receives nearly 3 million fewer votes than Clinton. But thanks to the archaic voting system the Electoral College appoints him president. Next, Trump appoints inexperienced family members on highly paid positions in the administration. Thus, with Trump corruption and nepotism enter the White House.

His company runs an ailing Mar-a-Lago club in Palm Beach, FL. Few customers are willing to pay $100,000 per year for membership. Trump changes that immediately after he enters the White House. By regularly visiting the club and mingling with paying customers, interest in the club grows rapidly. This enables him to double the membership fee to $200,000 per year.

The Government Accountability Office has looked at the cost of 4 visits to Mar-a-Lago early in Trump’s presidency (February 3–March 5, 2017). The travel costs amount to $13.6 million (or $3.4 million per visit). Outsourcing the US presidency to the Trump organization turns out to be very expensive for the tax payer, but very profitable for Trump. 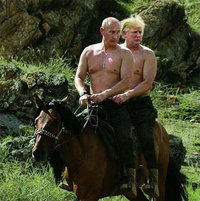 The Russian ruler Vladimir Putin, Trumps mentor, is also corrupt. Trump learns from Putin that the best way to preserve your own corruption is to accuse your rivals of corruption. And he also learns that restricting the Internet may be very useful to silence critics. Trump is like putty in Putin’s hands.

Putin meddled in the 2016 presidential election to help Trump win. According to William Evanina, director of the National Counterintelligence and Security Center, Putin is doing it again in the 2020 election. Trump’s response: “I don’t care what anybody says.”

Trump’s executive orders regarding TikTok and WeChat are unclear about their scope, in particular precisely which transactions would be covered. However, Trump’s most amazing remark is that should Microsoft (or Twitter) strike a deal to acquire TikTok, the US Treasury should get a substantial amount of money for the deal.

To a failed state?

There is no obvious legal mechanism to make such a deal happen and the executive order doesn’t mention it at all. That is good, for a deal as Trump utters would be typical for a failed state. Thus, the USA doesn’t yet look like a failed state, but does already look like a banana republic. Let’s hope it won’t get any worse. But another 4 years of Trump could lead to a failed state.

Related: Chaos and ignorance in Washington and A shady president

See also our Facebook page "Trump shoot his own foot" posted on August 14.

Mark N Cheryl Gauthier After many elections there is talk of doing away with the electoral college. We should make sure this never happens!

In their infinite wisdom, the United States' Founders created the Electoral College to ensure the STATES were fairly represented. Why should one or two densely populated areas speak for the whole of the nation?

The following list of statistics has been making the rounds on the Internet. It should finally put an end to the argument as to why the Electoral College makes sense.

Do share this. It needs to be widely known and understood.

Therefore these 5 counties alone, more than accounted for Clinton winning the popular vote of the entire country.

The United States is comprised of 3,797,000 square miles
When you have a country that encompasses almost 4 million square miles of territory, it would be ludicrous to even suggest that the vote of those who inhabit a mere 319 square miles should dictate the outcome of a national election.
Large, densely populated Democrat cities (NYC, Chicago, LA, etc.) DO NOT and SHOULD NOT speak for the rest of our country!

And...it's been verified and documented that those aforementioned 319 square miles are where the majority of our nation's problems foment.
And now you know the rest of the story!