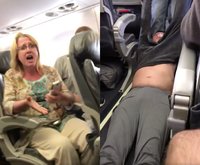 Only millionaires are at the helm of US airlines. Their CEOs’ compensation ranges from $2.4-15 million (€2.1-13.4 million). On their watch, US airlines nickel-and-dime their customers and transport them like cargo. They seem to consider it necessary for the carriers to earn high profits.

In 2017, United Airlines’ boss Oscar Munoz did not take his bonus. It is the year in which United calls security officers to forcibly remove Dr. Dao from a flight. He is a paying passenger and is sitting in a seat for which he has a valid boarding pass.

The reason for forcibly removing him from the plane is that United gives his seat to an employee. Obviously, employees have priority over a paying customer.

The airline has bad luck because shocked passengers catch Dr. Dao’s forcibly removal on videos that go viral on the internet. In the absence of those videos there would have been hardly any commotion. And Oscar Munoz could have taken his bonus without a problem.

A clear illustration of airlines’ priorities is that customer satisfaction is usually not included in the metrics determining a US airline CEO’s pay.

However, there are a few exceptions. JetBlue includes customer satisfaction in the factors determining CEO Robin Hayes’ compensation. And following the dramatic incident in 2017, United added it this to its metrics as well.

The ratio of a US airline CEO’s compensation to the median worker’s pay is outrageous, in particular at the 3 largest carriers. Delta Air Lines’ CEO Ed Bastion gets the highest pay: $15 million (€13.4 million). But Doug Parker earns at American Airlines relative to the median worker the most: 195 times this worker’s wage.