Who pays for frequent flyer miles?

Airlines started nickel-and-diming their customers more than a decade ago. Their ancillary revenue has been growing ever since. IdeaWorksCompany’s definition of this kind of revenue is: “revenue beyond the sale of tickets that is generated by direct sales to passengers, or indirectly as a part of the travel experience.” An important role plays the co-branded credit card.

2. Commission-based products.
3. Frequent flyer activities.
4. Miscellaneous sources such as advertising.
5. The a la carte components associated with a fare or product bundle.

Obviously, ancillary revenue comprises more than just nickel-and-diming flyers. Table 1 below shows the 2018 revenue as included in IdeaWorksCompany’s recent report “2018 Top 10 Airline Ancillary Revenue Rankings.” Frequent flyer programs no longer aim at building or strengthening customer loyalty, although this was the original goal. Rather, those programs have evolved into profit centers. 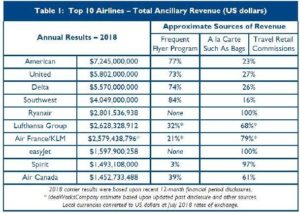 The programs work like this. Every time the holder of a co-branded airline credit card makes a purchase, (s)he accrues miles. The bank issuer of the card pays for the miles that are then deposited to the frequent flyer account of the cardholder.

Thus, carriers sell millions of frequent flyer miles to financial institutions, who use them as rewards for their customers. Airlines’ biggest customers are American Express, Barclays, Chase, and Citibank. This way they encourage their customers to pay by using the (co-branded) credit cards they issue.

Frequent flyer program members pay fairly high banking fees for their co-branded credit cards. Thus, the interesting thing is that frequent flyers pay themselves for the miles through those fees. Carriers and banks have developed smart ways to nickel-and dime their customers and keep them satisfied at the same time.