A litmus test for Boeing

Boeing is facing turbulence as a result of 2 crashes, each with a Boeing 737 MAX. First, on October 29, 2018, Lion Air flight 610 crashes into the sea 13 minutes after departing Jakarta. All 181 passengers and 8 crew members are killed.

Second, on March 10, 2019, Ethiopian Airlines flight 302 crashes into the sea 6 minutes after departing Addis Ababa, killing all 149 passengers and 8 crew members. This second crash - less than 5 months after the first - prompts a worldwide grounding of all 737 MAX aircraft. 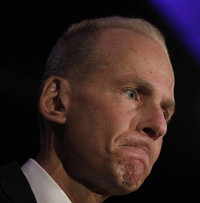 Boeing’s annual meeting of shareholders was scheduled in Chicago on April 29, 2019. Chairman, President and CEO Dennis A. Muilenburg seizes the opportunity to talk for a short while with the press.

He uses the word safety frequently and claims that after a software update the 737 MAX will be one of the safest airliners ever. After this Trumpian propaganda he leaves the press alone. The meeting doesn't last longer than 15 minutes.

Muilenburg tells the shareholders that Boeing has made 146 test flights with the new software. Moreover, he claims that nearly 90% of the 737 MAX customers have tested the updated software in simulators.

No training for pilots

Before the 737 MAX enters service, pilots receive hardly or no training to fly the aircraft. Muilenburg defends it by claiming that there is no separate system. This suggests that the Maneuvering Characteristics Augmentation System (MCAS) is not a system, or not a separate system.

Yet, the MCAS seems the root cause of the crashes. Both the Lion Air and the Ethiopian Airlines crew have been struggling with it. The MCAS pushed the plane’s nose down, while the pilots were not trained in dealing with this situation.

Boeing’s largest 737 customer, Southwest Airlines, recently revealed they did not know that an error light in the cockpit has been switched off.

reports that warnings from whistle blowers at Boeing and the US Federal Aviation Administration (FAA) have been ignored. And The New York Times writes that the FAA has been increasing its scrutiny of Boeing’s plant near Charleston, South Carolina. In this plant, that half of the 787 Dreamliners produces, manufacturing errors and weak oversight at times threatened to undermine safety.

FAA too dependent on Boeing

It seems that Boeing has made errors and was too eager to get the 737 MAX into the skies, while the FAA seems too dependent on Boeing’s expertise. Boeing hopes to get green light from the FAA for its 737 MAX soon. A different question is whether passengers will be willing to give Boeing the green light. That will be the litmus test.

Related: “How dependent is the FAA on Boeing?”