Are trains better for the environment than planes? 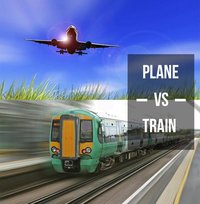 It is not easy to calculate the environmental footprints of trains and aircraft. What should be taken into account when making calculations? Is it only the CO2 emission during the ride of flight or more than that?

Another example is the infrastructure. Building and maintenance of railway systems and airports may be included. If few trains run on a particular route the impact per train ride is higher than when many trains use those rails.

The impact may also vary with the fuel used. A plane’s environmental impact may be smaller if it burns biofuel rather than fossil fuel. However, biofuel may compete with other agricultural produce so that new farmland may be needed, which may be at the expense of a part of a rainforest.

It illustrates that making an LCA is not only extremely complicated, but also to a certain extent arbitrary. LCA research is often conducted by consultancy firms. Although they are independent the principal will have some influence.

Even if a principal does not exert pressure on the consultancy firm, the principal does decide what budget is available for carrying out an LCA. The smaller the budget, the less time will be available and the more simplifying assumptions have to be made.

Many people would intuitively assume that the environmental impact of trains is smaller than that of aircraft, certainly if the travel distance is relatively short. There are LCA analyses that offer some evidence for this assumption. But there are also studies that conclude there is no difference in the environmental impact of trains and planes. This suggests that LCAs may be arbitrary.