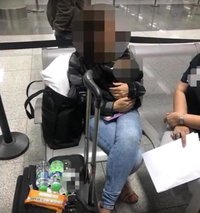 Jennifer Erin Talbot is an American woman from Ohio. She is on her way to board a Delta Air Lines flight from Ninoy Aquino International Airport, Manila, Philippines to the USA. Without any problem she passes passport control, so there is no obvious sign of human trafficking. At the gate there is a final security check, which she tries to pass as well, but this time she fails.

A security officer discovers a 6-days-old baby in her carry-on bag. Ms. Talbot cannot show a passport for the baby. Nor can she produce a boarding pass or a government permit for the baby.

She is denied boarding, while Delta personnel calls immigration. Immigration staff arrest her at the airport, while they turn the baby over to the National Bureau of Investigation. Officials are now searching for the baby’s parents, who have been charged under a child protection law. According to the National Bureau of Investigation Ms. Talbot presents an affidavit allegedly from the baby’s mother. This should prove that the baby is traveling to the USA with the mother’s consent. However, the affidavit is not signed by the mother.

Officials say there is no government travel approval issued for the baby either. According to immigration officials there was really an intention to hide the baby. Therefore, human trafficking charges have been filed against Ms Talbot. In addition, the US embassy has been notified of her arrest.

The government presents Ms. Talbot to the press in Manila, while she is wearing an orange detainee shirt and is handcuffed. Although it is not yet known what is going on, the government raises the impression it is about human trafficking. But it is certainly also a human tragedy.