Airports with the best Wi-Fi Tech blog Rotten WiFi has revealed the top-20 airfields for best Wi-Fi access in 2016. The blog tested Wi-Fi speed and quality at 226 airports worldwide. They are gradually improving their digital access and are enabling customers to get online.

Rotten WiFi ranks the airfields on the basis of the average download speed (in Mbps). The ranking changes if the average upload speed is taken as standard. Yet another norm could be the customer satisfaction rate.

The North American top-10 includes only US airports. The Bill and Hillary National Airport in Little Rock, Arkansas, offers the highest download speed (43.17 Mbps) and ranks 3rd in terms of customer satisfaction. 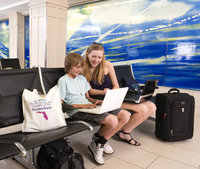 In Asia, Don Muang International Airport in Thailand has the highest download speed (37.1 Mbps), but its customer satisfaction is moderate.

In Europe, Düsseldorf International Airport in Germany has the highest customer satisfaction (8 out of 10), while the average download speed is only 11.03 Mbps. The European top-10 includes no less than 5 German airports.

The table below ranks airfields worldwide on the basis of customer satisfaction, while it also displays the average download speed. It seems there is a relationship between these 2 variables although not all too strong.